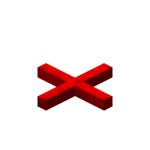 Red Alloy Wires, also known as Redstone Alloy wires or Plain Redstone wires, are a type of wire that is capable of transmitting redstone signals. It is the most basic type of redstone wiring.

As a Crafting Ingredient

Red alloy wires are a type of surface wire. Surface wires are the primary type of wire. They must be placed on a solid surface. They can be run up walls and such, but will fall if the block they are sitting on is removed, much like torches. Wires can also be run around corners or between edges. These are the types of wires that you will use most often. The following properties are shared among every type of surface wire.

Red alloy wires will connect to any thing that can interface with redstone, such as a piston. However, even if it doesn't visually connect, any adjacent blocks will be powered. The block it is sitting on will receive a strong signal, while all other block around it will get a weak signal. No visual connections doesn't mean that block won't be affected.

Issues pertaining to "Red Alloy Wire" are maintained on the ProjectRed Github page. Report issues there.